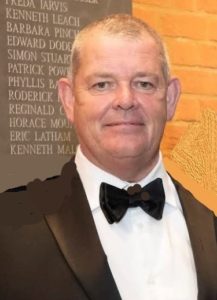 Our Beadle Mark Anderson was born in Ipswich.  Soon after the family moved to Cornwall and Mark was brought up in Penzance.  Mark attended the local grammar school and at 16, left to join the Army.  He was assigned to join the Royal Corps of Signals serving in Northern Ireland, Germany, the Middle East, and the Balkans.   In 2000 Mark was promoted to Warrant Officer Class 1 and posted to Middlesbrough as the Regimental Sergeant Major of 34th (Northern) Signal Regiment.  In 2003 Mark was appointed as the Office Manager in Northampton’s Army Recruiting Office.

In 2010, Mark was selected to become a Yeoman Warder at the Tower of London.  Apart from the usual duties associated with that position, Mark is a member of the team who look after the Ravens.

Mark has been married to Sandi for thirty nine years; they have three grown up children and three grandchildren.  In his spare time, Mark is a member of the London City Voices Community Choir.

When not in London, Mark lives in Leicester, and visits his local rugby club where he is an Honorary Vice President.   He is also writing two novels and hopes to publish them at some time in the future.

Beadle, sometimes spelled “bedel” is from the Latin “bidellus” or “bedellus”, rooted in words for “herald”,  an official of the Roman Temple.

The Livery Companies, as they evolved, needed a point of contact between the Master, Wardens, and Court of Assistants and the Livery in general.   They therefore appointed (and paid for) a Beadle, who took care of the Company’s meeting place (‘Hall’), called the Court members and/or Livery together on behalf of the Master, and enforced any disciplinary measures decided by the Court.

He would be issued with a Staff of Office, often wrongly called a mace, with which to protect the Master and enforce discipline. The Staff is usually a tall one so that it could be used as a rallying point at Common Hall etc. when the Livery was summoned to “Attend upon the Master”.