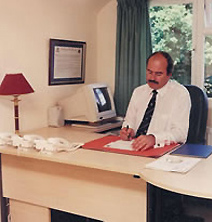 Ralph Riley was appointed Clerk upon the inception of Livery in the year 2000, having previously been both Deputy Clerk and Assistant Clerk respectively since 1989.

Born and educated in London, Ralph now resides in the quiet Suffolk village of Worlington with his wife Stephanie and dog D’Arcy.

His career began in the City of London in 1974 when he joined the Corporation of London in the Office of the Keeper of the Guildhall.

In 1984 he moved to the Chamberlains Court where, as Deputy Clerk, he was responsible for admitting individuals to the Freedom of the City of London. Ralph was made a Freeman himself in 1984 and became a Liveryman of the Distillers Company in 1985 as well as being a Liveryman of the Water Conservators Company, he is also a freeman of both the Fuellers’ and the Woolmens’ Companies where he served both respectively as Clerk between 1998 and 2008.

He enjoys challenges, playng Golf and driving! He also likes to spend time in Spain where he and his wife have a holiday home and a sports car in the garage.