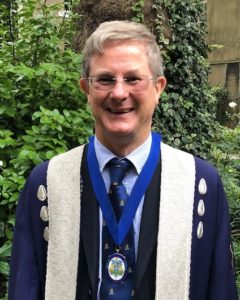 Rob Casey BSc. Eng., MCIWEM, joined the Company as a Freeman in 2006 and was appointed as Thames Warden in July 2019.

Born in North West London, Rob obtained a degree in Civil Engineering at Imperial College London and started a career in the water industry, initially with Southern Water, moving to Thames Water in 1977. Rob has over 40 years of experience in water systems engineering with specialisation in applying hydraulic models for planning, designing and optimising major water supply systems. In the late 1990s he played a key role in implementing new advanced data processing and model building techniques to revolutionise network model construction speeds and detail, including links to Geographic and Customer Information Databases.

Rob is a member of the Chartered Institution of Water and Environmental Management and was Chairman of the Metropolitan Branch in 1999/2000. He was also a member of the American Water Works Association for 20 years, serving as a technical expert on AWWA research projects and reviewed papers for the technical journal. He has presented papers at conferences all around the world. For many years Rob was a lecturer for Water Training International on Network Analysis and Distribution Function courses at York, UK.

Rob has a keen interest in the history of London’s water supply presenting at various meetings including the Royal Society of Chemistry. He is an ambassador for Museum of London Archaeology.

We use cookies to ensure that we give you the best experience on our website. If you continue to use this site we will assume that you are happy with it.OKPrivacy policy