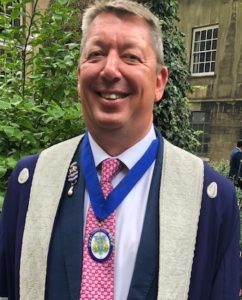 Martin Baggs BEng, FICE, FIWEM, MIW has been a Freeman of the Company since 2012 and was appointed Walbrook Warden on 8th July 2019.

Martin originally trained as a civil engineer and started his career in the water industry in 1986 with Southern Water in the days of drawing boards, pens, stencils and tea trolleys. Martin spent almost 20 years with Southern Water covering most areas of the business enjoying the challenges that it brought as the Operations Director before eventually leaving in 2005 to become Managing Director of South East Water.

With a total change of direction Martin then joined Macquarie Bank with responsibility for a range of investments across Europe including Thames Water.   After a spell of being a Non-executive Director he became the Chief Executive Officer of Thames Water in 2009.  As well as being responsible for running the largest water and wastewater company in the UK serving 15 million customers, the role also included the development of the £4.2bn Thames Tideway Tunnel following in the footsteps of the great Sir Joseph Bazalgette.

Martin is a Fellow of the Institution of Civil Engineers, an Honorary Fellow of the Chartered Institution of Water and Environmental Management, a member of the Institute of Water and a Trustee of Thames 21.    He is passionate about education and the environment and has a keen interest in the history and heritage of the industry whilst having a reputation for being challenging and delivering change.

Being born in Portsmouth, educated in Plymouth and now in Brighton Martin has always lived on the south coast enjoying everything that it has to offer.   He has a range of hobbies and interests but above all else enjoys spending time with his two daughters, Rosie and Anna.

We use cookies to ensure that we give you the best experience on our website. If you continue to use this site we will assume that you are happy with it.OKPrivacy policy